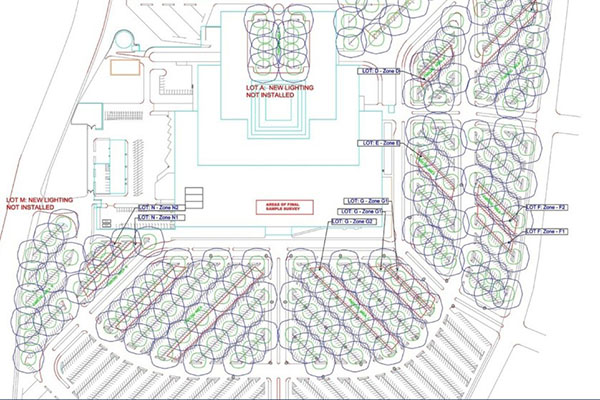 The project involved the replacement of the exterior lighting in the very large parking lot surrounding the Laguna Nigel Federal Building. The lighting was an important issue to agencies at the building since so many workers arrive and leave during dark at portions of the year and during nighttime operations, which are ongoing at the facility. The goal of the project was to use the most energy efficient light fixtures possible. A portion of the project was ARRA funded.

The design team investigated various alternative solutions using different light fixture types and various layouts. A photometric study and cost estimate of each alternative was done to evaluate the alternatives. The preferred solution included the use of very energy-efficient LED fixtures.

The design proceeded first with the two sections of the parking lot, then was enlarged to include almost all the parking areas with ARRA funding. Total construction cost was $1,200,000.

Brokaw Design was the electrical engineer who prepared the lighting study and contract documents. Charles Beavers was the project manager while working with Interactive Resources. Our team was responsible for the electrical and lighting design including the surveys of existing conditions, preparation of designs, plans, specifications, estimates, record drawings, value engineering, construction phase services including construction inspection services for repair, improvements, remodeling and alteration of all building systems and features.

The lighting requirements had conflicting goals. The goal to be extremely energy-efficient was in contrast to the requirement to have high enough lighting levels to support the security camera system planned for the facility. The solution was to design a two-level lighting system activated by motion sensors. Under normal conditions low-lighting was used. When motion was detected in the lot by the sensors the lighting level would increase 50 percent to facilitate better visibility for security cameras.

An independent consultant was hired to take night-time light measurements of the completed project to determine if the as-built condition was in compliance with the design targets for both horizontal and vertical illumination as well as illuminance uniformity. It was an important goal for the illumination not just be above a certain level, but that the level be uniformly maintained so that the human eye can adjust properly and see clearly.

“…light quality of the new LED lighting is stellar. The quality is especially noteworthy as compared to the previous High Pressure Sodium lighting which it replaced. Specifically, color rendering (CRI) is excellent, with CRI of 75+ and light levels consistently above the minimum IES recommended foot-candles. Uniformity is constantly well above the maximum to minimum of 15:1 as recommended for high security lots by IES.”

GSA Contracting Officer Heather Caney made these remarks in her official evaluation of the project:

“The contractor responded to the time constraints of ARRA funding by delivering the final CD’s ahead of schedule. There were also considerable difficulties during the construction phase, but the AE provided workable solutions. ..Chuck Beavers was a real pleasure to have on the team. I look forward to working with him in the future…”